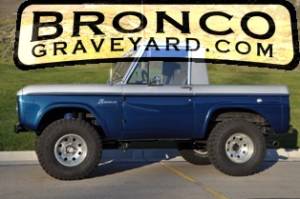 The Story
I have restored several Bronco's from scratch, had a great time, thoroughly enjoyed the build, sold them and lost money.
This time I thought I would start with most of the expensive work already done so I bought a frame off restored one as a starting point, I then dumped a ton of money into it to make it exactly how I wanted and will again lose money. This little Halfcab has over $40,000.00 into it by myself and I have no idea how much the previous owner lost. I have decided that I enjoy the building more than the owning so it needs a new home and I am off on another project. My wife doesn't mind me losing money as long as I stay in the garage, take out the trash, and don't bother her.

The Vision
First of all Halfcabs are just cool. They were only made for a few years and this body is indeed an original U14.
Second, I have always liked the looks of uncut Bronco's but wanted larger tires than would fit the rear fenders.
Sooooo, off to the body shop we go. The rear wheel openings were cut, moved up 4", and widened a little. The result is a classic uncut look that a 33" tire fits and looks like the way Ford should have done it in the first place.

The Drive
Although it has been in a few car shows my main purpose was to make it drive down the road like something not from the 60's. We started with something from the 70's. Although the body and title are a 68 all the drive train is from a 1977. That means we get a Dana 44 up front and Ford 9" in the rear. The front radius arms have drop brackets to maintain the right castor, and the rear has a factory anti sway bar, (just try and find an original one). It has C4 automatic and a V8 (more about the motor later on). Power disc brakes and power steering.

The Ride
I am definitely not a kid any more so a lot of thought went into making this ride nice. I have used many different suspensions in past projects and settled on a modified Duff's lift that ended up being about 2.5". Just enough to clear everything but not so much to give it a high center of gravity. The rear has Duff shocks with Bilstein up front. The new 33" Goodyear MTR's and aluminum wheels are about perfect for looks and a straight tracking ride. I did take it up to 80 MPH on the freeway the other day just to see how it handled and it was great, not scary at all.

The Interior
Comfort was what we were looking for here. A custom dash was built so the Vintage AC system looked like it belonged instead of an after thought. Look how it drops down to accommodate the stereo. A new carpet kit was installed over an insulated sound and thermal blanket system along with a firewall thermal barrier. A custom headliner and kick panels went in next along with new door panels and armrests. A factory Ford CD/Radio comes out through 4 speakers. Between the seats is a lockable Tuffy console with drink holders. Look behind the heated Mastercraft seats, ($1,800), and you will find an exclusive. All half cabs have no storage behind the seats because the bulkhead is angled to the seats. I built a vertical bulk head which made room for tons of storage space.
There a lots of little things also. The wipers were converted from vacume to electric, (not cheap), and a modified cover was made.

The Motor
It is a stroked 302 to 347 CID built by JBA. I have pages and pages of info if you are interested but the result is about 350 HP that cost $10,000.00. It does not have a radical cam, (Edelbrock 2122). It idles great with just the right amount of exhaust tone. Duff's headers and dual exhaust. I tossed the old Ford power steering pump for a new Saginaw.

So what is wrong?
The windshield has scratches where the wiper rubbed. As much as I tried to eliminate wind noise the weather stripping needs a little more work.
Since some of you saw it last I repainted all the dark blue because it wasn't quite perfect. I adjusted the transmission and sealed the leak.

Comments:
What a nice ride. i dont know how old this post is but what a beauty! Would have purchased this one! A++

Comments:
You do beautiful work!!!! Would love to be able to restore my Baby Princess!! She is a 1996 Bronco w/4" suspension lift, 33" tires and beautiful off road lights. Have been collecting parts to have her redone, but am having a hard time finding someone trustworthy to make her beautiful again. Would you be interested??

Comments:
How much are you trying to sell it for?

Comments:
I'm curious how much you got for this one, I'm trying to decide how much more money to put into my Bronco - if it will be worth it or not. Also if I could have that engine information it'd be great. czeman@gmail.com. Thanks a lot.