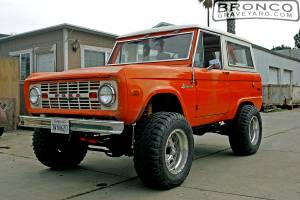 Put two seasoned fabricators in a shop looking at the engine bay of an early Bronco. Have one glance over at the big block 454 jet boat motor sitting on an engine stand and say it would be a wild ride but there is no way you could stuff that motor in the Bronco engine bay, close the hood and make the Bronco a sleeper.

My comment was why not? Sure it could be done, and how much time do I have. Then OK, watch me.
That was the challange.

My goal was to build a Bronco that looked stock, was clean, a bit different, extremely fast, grab attention, and set up for the sand dunes. It was to be unique but found the results irritate both Ford and Chevrolet owners the same. The Bronco was set on a shortened 78 Bronco frame. Engine was set low in the frame so a 4 bbl could be run and not have the tell tale hood scoop that says modified.
Appearance wise it looks very stock with the OEM chrome bumpers and mild mud tires and alumium wheels.
Start it up and heads do turn.

One car magazine editor sized it up best. He would rather be hated than completely ignored.

Comments:
Very nice! can you let me know your tire and rim size? Also what backspacing? My Bronco is set up just like yours and I'm in the tire / rim buying mode.

Comments:
Hi Mike, Looks are deceiving. The bronco is on a 78 bronco frame that has been shortened. I ran 17 x 9" wheels with a 4.5" back set to push the tire under the truck. Tires are 33-12.5-17's As soon as I get the big block running I have metal flares I will blend into the body. Wheelsforless has great prices on wheels Larry

Comments:
Body is metal Thanks for the kind words

Comments:
Nice!!! It looks pretty stock from the outside. I feel sorry for the sucker that lines up with you at the light or in the dunes. Now if you could only get it to sound like a 302 you'd have the ultimate sleeper :)

Comments:
Sound is a give a way. Doesn't sound like a small block Larry

Comments:
Larry would there be any reason according to your experience building this beauty tha tI couldn't go with the same wheel/tire combo on my 70 with only a 1" body lift? My email: abelardo13@yahoo.com

Comments:
I don't see why people are swearing. I have 3 Fords. I am not mad. But I have one request. Please don't put fender flares on this truck. The body is beautiful. I have the same one on this site all original. Just get diamond plated mud flads or very small mud flaps that you can paint and blend the same orange color as the truck.

Comments:
Very nice Larry! We need to run it at the dunes! Would be a lot of fun my friend. Shane

Comments:
This is a Ford site, I would rather people keep their chevy junk off of it. We don't have to look at crap like this enough in automotive and off road magazines? The whole reason I come to this site and buy all Ford mgazines, although not exclusively, is that I dont have to put up with the chevrolet brand being constantly shoved down my throat. Really I hate to even comment, because the only reason I could think of for a person to build crap like this is that they thrive on the conflict and drama it brings about. I will be sending an email requesting that this vehicle be removed from this site.

Comments:
Hi Josh, As you become more mature you learn if you observe something that bothers you like this vehicle, you say nothing and go your way. This vehicle was constructed to grab attention and you gave me that. Thank you and take care, Larry

Comments:
Just a beauty. Are you in the market to build a bronco or direct me to who can. I love the rear panels WITH OUT FLARES so when you cut them and then graft new ones in it will look even better. Can't stand flares or door inserts. If you know a builder give me a call 724-289-3144 Tony

Comments:
The Toyota 4x4 pick up has a nice mild flare on the front fender. Game plan is to use that flare but cut and add a spacer of 2" in the rear for 33" tires and then add a bit wider spacer in the front to allow for turning.

Comments:
How much are you asking

Comments:
At this point in time I am not ready to sell. I want to finish it off and enjoy before I move it on.

Comments:
Larry, I like your choice on how to get upgrades for the early bronco. I've scoured the internet hoping to find a tech article on what you did to get the frame to accept the bronco body...no luck. Maybe its my android phone..but I couldn't acces some older articles on another forum. So with this setup misc parts are. from a different year. Clever. Sure like to contact you. Paul G. 503.798.2119

Comments:
No one seems mad when someone puts a new 5.0 in a old bronco. What's wrong with the big block. It's just nice to see another one on its way to the road or mud. I wouldn't mind a ls7 in mine. But for now I stuck with the 289, but not stock. Can't wait to get more body work done to get mine to get it closer to getting it on the road. Yours looks good.

Comments:
No one seems mad when someone puts a new 5.0 in a old bronco. What's wrong with the big block. It's just nice to see another one on its way to the road or mud. I wouldn't mind a ls7 in mine. But for now I stuck with the 289, but not stock. Can't wait to get more body work done to get mine to get it closer to getting it on the road. Yours looks good.

Comments:
I must say you did an awesome job on putting the big block Chevy in, i would never thought it would work! You really earned bragging rights for that job. I will admit I am a ford fan and would love to have seen a 460 in the bronco but I realize you already had the 454 so once again it looks good and you are a pretty darn good fabricator to pull this off!