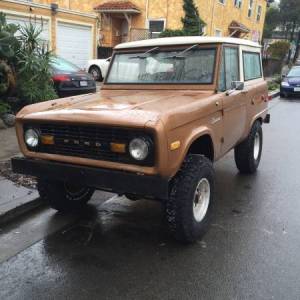 I bought this bronco on eBay a few months ago. I thought it was going to be a fun summer truck to take camping to the mountains etc, however I bit off more than I can chew. She is a bigger project than I have time or money to donate for restoration, so sadly I have to turn her over to someone looking for a great project truck.

All the Details I know:

Previous owner was from Kansas. Before that Washington.

The engine has been re-done, fairly recently. When I got it there was a bad oil leak, a corroded battery terminal and failing tires. I've put BRAND NEW 33" Goodyear tires on her. Fixed the leak, and fixed the battery terminal. Since then she's started up first time every time. I've also installed a locking lift-gate handle.

The Transmission is 3 on the floor + a Low crawler gear

There is no spare tire.

Some of the dash gagues don't work.

Tach doesn't seem to be connected.

The right turn signal indicator doesn't flash on the dash.

The radio powers on but doesn't make sound - no antenna

The dash-pad has a crack or two.

It's missing carpet on the driver side rear wheel well. (and some of the carpet is frayed in other spots)

The back seat has a loose bolt that needs to be tightened down, haven't gotten around to it, it jumps around a little when driving.

The weather sealing on the doors is nearing end of life, but around the windows it seems water tight.

There is some signs of rust near the front wheel wells, back corners of the engine cavity, and a few other spots around seams, Typical for a 44 year old truck.

The transfer case isn't labeled, I've not totally figured out which is 4H and 2H, just been driving with what feels right and with the front tires unlocked.

I've put less than 10 miles on since buying it, since I've had her in the shop with the oil leak and flat tires.

2 gas tanks but I don't know if the second one is connected. The fuel gague doesn't work, when I topped it off there was some gas leaking.

That is about all I know!
There's no documents or anything for the past work. There's a hand full of spare parts I found under the seats.