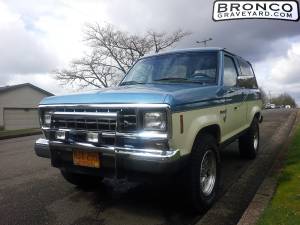 My little Bronco II certainly did not land in my hands beautiful, but she's a real head turner now. Unbelievably, I bought her just last year in the spring for $225! But that considered, she also had boat tires, hadn't run in 5 years and served as a green house for moss pushing its way through the carpeting.
On 4 flats she sat, and after dumping truck loads of love and much more money into it. New windshield, brand new custom interior, new tires, and replacing damn near everything in the engine bay, just short of a rebuild, new freeze plugs, gaskets, seals, and believe it or not, 57,000 original miles.
Don't get me wrong though, the previous owner knew as much about cars as your ordinary neighborhood dog. He couldn't figure out the difference between standard and metric. I won't even talk about the spilled paint in the back, a foreign alternator, and the mess he called wiring.
However, here she is now. Beautiful, fully functional, practical, and capable of anything. So fun off road, great in snow and better in mud! She's no pavement princess. Charming, like the way she walk, like the way she talk, and that's why she's my Suzie Q after CCR!

Comments:
Forget the ride, I like the pic of you... rondawg80@yahoo.com

Comments:
I'll give it 5 stars on the fact you dedicated yourself to it and came out with a gem. Plus its a manual... awesome!!!

Comments:
great work on this ride...still tryin to post my pics.