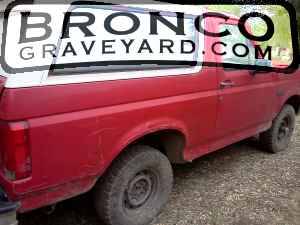 Formerly owned by the Yakima Indian Nation of Washington State. It was beat to tarnation on the super rough mountain fire roads on the Res. Now it's the fixer upper I never knew I always wanted, until I saw it on Craigslist. $850 running!

Actually, I bought it because it WAS rough and figured it would be a good vehicle to leave at trailheads for hiking, hunting, camping, fishing, etc. I never really intended it to be a fixer-upper because I was going to leave it pretty crappy. But I just could not resist the urge to fix it up. Doggone vehicle upgrade projects are a disease, I tell you what.

Thanks to Bronco Graveyard, Amazon.Com, NAPA, Summit Racing, LMC Truck, Joe's Transmission in Pittsburgh, Six States Distributors, and Drivetrain America for parts, Ron Fitzpatrick's VintageJeeps.Com for the Gillespie paint, Monstaliner.Com for the awesome UV-proof polyurethane truckbed liner, Bonnie and Clyde's in Pasco for the new exhaust system, and Diesel Performance Unlimited in Pasco for the Detroit Truetrac install and set-up!

Comments:
Posted new pics from today. I'm about 75% done, maybe closer to 80%. Still have to put in the black headlight doors and all new front lights, black out the chrome windshield trim, rebuild the front outer axles a bit, replace the shocks, and replace that damn broken rear window.

Comments:
Right On!!! Need to change your cover-photo so you can get some higher ratings and credit for your work (especially with the 'before & after'). The old hag really turned out be a good looking gal. Nice Work!

Comments:
Very cool and nice work. Looking forward to more progress pics! Just got my 94 a couple months ago and am working on it as I get the money. And you're right....... It is very addictive. I love seeing these Broncos that look like they could very well be on their way to the crusher and then someone like you get it back where it should be. Great Bronco Bro!!!