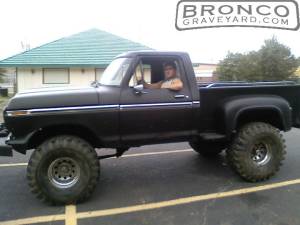 So far I've invested about $3,800, since I got the truck in June 2010, in repairs. The previous 2 owners abused the heck out of this truck and either didn't fix anything or jerry rigged it. The steering column was badly bent from the PO's pulling themselves into the truck by grabbing the steering wheel. Ugh!

Honestly had I known what I know now I would have passed up on getting this truck and bought another one that was much less abused. Now I'm too deep into it to stop now. Don't get me wrong, I love this ol girl, she just had a lot of issues that I've just about got worked out. (hopefully!)

Things I've fixed or had fixed:

Comments:
i feel your pain. i have the same situation, except mine is a Frankenstein of different parts.

Comments:
Thanks! A couple of weeks ago I discovered I need to replace the rear axle or at least the housing. The PO must have ran it with a bad bearing and even though I've replaced the rear wheel seal twice now, it still leaks. There is a groove wore in the axle that is letting the gear oil seep past the seal. Ugh! When I think I see light at the end of the tunnel it turns out to be a train. lol

Comments:
Continue the good work and save the 70's